When you think about tiramisu, the first thought is that rich, creamy, coffee cream, which just melts in your mouth. To achieve that creaminess, you need to know what sabayon is. Sabayon is a light custard made of egg yolks, sugar (erythritol), and sweet wine (usual marsala) whipped in a double boiler to incorporate a large amount of air. In the case of keto sabayon, we will be whisking egg yolks, erythritol, and coffee (and coffee liqueur or syrups, usually Kahlua or Baileys). You have to watch how much you are using as they have a lot of sugar, that’s why for my desserts I use pure instant coffee with some water. I don’t like too strong coffee flavor, so you can adjust your cofeeness to your likings.
Why double boiler? If you put this mix directly on the stove, it will become scrambled eggs. That can even happen if your steam is too high. To set up a double boiler you need a pot 1/3 with water and a bowl that sits on top. Heat should be medium. You need to constantly mix the sabayon to prevent egg yolks cooking and to put as much air as possible.
Halfway, you will be also adding dissolved gelatine in this mix, to help it set.
I always on the end strain my sabayon, as can happen that there are some small amount of eggshells. You will know that sabayon is done when becomes very thick, almost double an amount, the color will be paler and you will be able to see the bottom of the bowl while whisking.
There are many variations and adaptation of tiramisu and some of them use the egg whites some don’t. Originally, tiramisu was made all by hand and there were no ladyfingers that you can buy, so egg yolks are used for cream, and egg whites are done for ladyfingers. So I adapt my recipe also depending am I making the cheesecake, cup, or a log. Whipped egg whites are giving more air and volume to the cream.
Mascarpone is cream cheese used in all tiramisu recipes. I use Tatua in my recipes. It’s not cheap, I know, but it’s necessary. Make it room temperature before cooking as you will add it in strained sabayon.
Whipped cream should be a stiff peak. I use Tatua as has an amazing aroma, but it takes extra time to whip it, but you can use any unsweetened heavy cream.

Ladyfingers originally were made only from eggwhites but with the industrialization of the recipe, whole eggs were used. It contains eggs, flour, sugar and vanilla, long baking and drying. I have adapted the recipe from dacquoise to be the most similar to original, as we can’t have flour or sugar.

1. Keto tiramisu in the cup 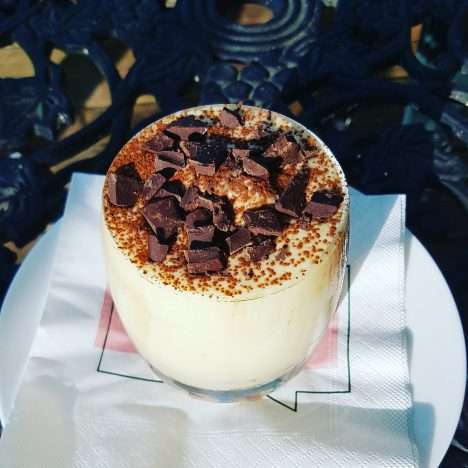 Method
Preheat your oven to 130 degrees Celcius.
Put in the bowl together and whip to stiff peak egg whites and erythritol (if you have a 1tbs of cream of tartar add). Once done, fold the almond meal (optional fold the crushed nuts). I use the ring mold to make the same size rings which will fit into the glass or a cup. On the tray with baking paper put a ring, add the mix, make it thick up to 3 cm, move the ring, and repeat. Make a couple of cm between them. Bake for 25 to 40 minutes or until dry on touch. Leave the tray to cool on the rack and take the ladyfingers to cool once firm also, so they don’t get soggy.
Cream
300ml heavy cream
200g mascarpone
Sabayon
6 egg yolks
80g Erythritol
30ml strong coffee (instant or espresso)
10g gelatin sheets dissolved
Soaking liquid
Coffee liqueur or strong coffee
Heavy cream
Vanilla
Cacao for dusting
Method
Whip heavy cream till stiff peak and keep in the fridge. On double boiler make the sabayon as described above. Once thick, strain, add mascarpone, combine till no lumps and fold whipped heavy cream.
You can now start to assemble: a layer of cream, dust with cocoa, a layer of dipped ladyfinger in soaking liquid and repeat with cocoa on top. Leave to set in the fridge overnight.
Enjoy!

The principle is the same as above, you just need to bake ladyfingers as a sheet, so no cutting or molding. 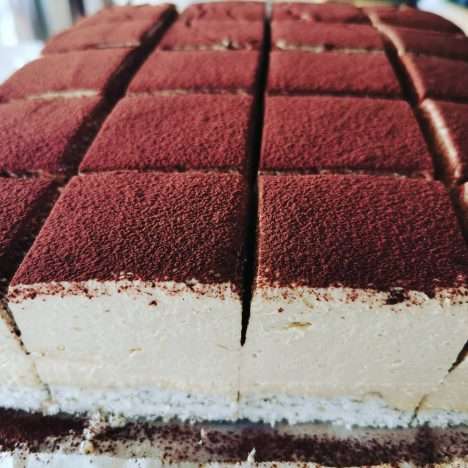 On double boiler make the sabayon as described above. Once thick, strain, add mascarpone, combine till no lumps and fold whipped heavy cream.
Add the mix to whipped cream cheese and incorporate it. Add more coffee if needed. Pour over a base in a cake tin and leave overnight to set. Dust with cocoa.

Being on Keto doesn't mean you have to give up on the breakfast variety. I always missed a lot of berry jam/marmalade...

Being on keto doesn't mean you have to get up of caramel. You will not be able to caramelize Erythritol or Xylitol,...

Being on keto is hard when it comes to bakery products. One of the most missed and hardest to replace is bread. There...